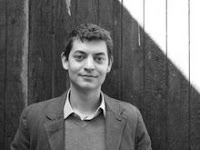 Stephen Usery interviews Kevin Wilson about his debut novel, The Family Fang. It's the story of Annie and Buster Fang, the children of noted performance artists who were used extensively in their parents' works and the effect it had on the family dynamic, as well as the career choices they made when they grew up. Both hilarious and heartbreaking, The Family Fang is already one of the most talked about debut novels of the year.

Stephen Usery interviews Jenny Wingfield about her debut novel, The Homecoming of Samuel Lake. Set in South Arkansas in the mid-1950s, Samuel Lake is a Methodist minister without a church who moves his wife and kids into his in-laws' home, which features a general store up front and an illegal bar out back, and his daughter becomes friends with a neighbor which puts the entire family at risk.
Posted by FM89.3 WYPL at 5:39 AM No comments:

Podcast - Megan Abbott "The End of Everything"

Stephen Usery welcomes back Edgar Award winner Megan Abbott to talk about her new novel The End of Everything. Known as the the Crown Princess of Noir, Abbott has shifted her view to a more contemporary setting as a teenage girl goes missing and we see the effect it has on her family, best friend, school, and community.